HDFC International Life and Re’s Board of Directors include esteemed members who are leaders and visionaries of finance, insurance and reinsurance industries. With their immense experience and leadership, they provide strategic guidance to the company 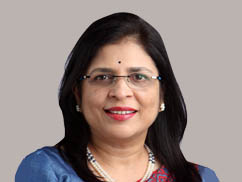 Vibha is also on the Board of HDFC Pension Management Company Limited.

Vibha has been appointed to the Board of Directors of HDFC International Life and Re Company Limited since September 18, 2018. 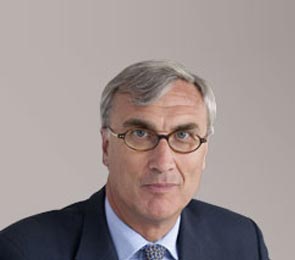 Immediately before joining Standard Life, Richard was CEO of Williams de Broe and prior to that served as CEO of Lloyds TSB, Lloyds TSB IFA and Lloyds TSB Stockbrokers.

Richard is a board director and Fellow of the Chartered Institute of Securities and Investments. He also chairs the CISI Ethics and Integrity Committee. He is a member of the Worshipful Company of International Bankers, the Cornhill Club and a Trustee of the Shrewsbury School Foundation.

Prior to his career in the financial services space, Richard served with the British Army in the mid 80’s and holds an Honours degree in Geography from the University of Durham.

Mr. Charnock has been on the Board of Directors of HDFC International Life & Re since its inception. Yuvraj Narayan is the Group CFO of DP World, one of the largest global transport and logistics companies with 78 container terminals across 40 countries.

The Group is listed on Nasdaq Dubai with a market capitalisation of USD19 billion[1], making it the largest listed entity in Dubai, UAE. DP World’s flagship asset is Jebel Ali Port and Jebel Ali Freezone which accounts for approximately 25% of Dubai’s GDP.

Mr Narayan joined DP World in 2004 and played a major role in growing the company’s global operations. He led the DP World’s international $21 billion Initial Public Offering (IPO), the largest in the Middle East, together with a successful international Islamic and conventional bond issue.

He was also instrumental in the $3.5billion acquisition of Economic Zones World FZE (EZW), the owner of Dubai’s Jebel Ali Free Zone, creating the leading integrated port and free zone in the Middle East.

Other landmark transactions include:

The first ever 30-year Bond in the Middle East

The acquisition of DP World Sokhna in Egypt, the Fairview Container Terminal on the west coast of Canada and Suriname

The monetisation of assets in Australia, Hong Kong and Canada

Mr Narayan has been named MENA CFO of the Year on three occasions in 2008, 2015 and 2016. His Finance team has won multiple awards including Finance Team of the Year in 2015.  DP World is also a regular winner of the ‘Best Company for Investor Relations, Middle East.

Mr. Davinder Rajpal is an independent insurance and reinsurance professional who began his professional career in 1961. Prior to retirement in 2006, he was “Member of the Executive Team” in Swiss Re – Asia HQ, Hong Kong (2002 – 2006), a body responsible for the strategic development and overall management decision making for all Asia Pacific Property & Casualty operations. He was also “Head of Turkey, Middle East and South Asia” markets for Property & Casualty business in Swiss Re(2000 – 2002). Prior to the above, Mr. Rajpal was “General Manager” for AXA China Region, Hong Kong (1992 – 2000). During this period, he was responsible for defining regional strategies and provided overall management of the company’s general insurance operations. He has also served as “General Manager” for CIGNA and his territorial responsibilities in CIGNA included Hong Kong, Taiwan and Macau (1985 – 1992).

He was also on the Board of Directors of IDBI Federal Life Insurance Co.Ltd., Mumbai and also was an Independent Non-Executive Director on the Board of PineBridge Investment Trustee Company India Ltd.

Mr. Rajpal has been on the Board of Directors of HDFC International Life & Re since its inception 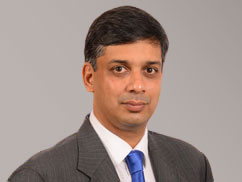 Mr. Badami has been appointed to the Board of Directors of HDFC International Life & Re since July 13, 2017 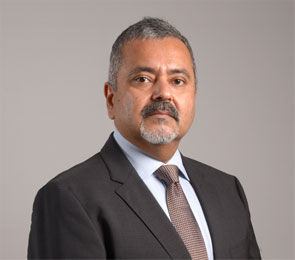 Mr. Amit Punchhi has been associated with HDFC Life since October 2017. Mr.Punchhi is responsible for reinsurance strategy and the international business of HDFC Life, which includes overall management of HDFC International Life & Re. Prior to joining HDFC Life, Mr. Punchhi was based in Hong Kong as Chief Executive Officer, Reinsurance Group of America (RGA). Additionally, he was also Managing Director of Singapore, India and the Asia High Net-Worth business.

Mr. Punchhi has 27 years of experience in Reinsurance, Insurance and Investments in both North America and Asia. He serves on the Board of Directors of the Pacific Insurance Conference, Asia’s leading conference for the insurance and reinsurance industries. He has also served on the Board of Terry Fox Run in Mumbai as well as on the Advisory Boards of the American School of Bombay and the Chinese University of Hong Kong. 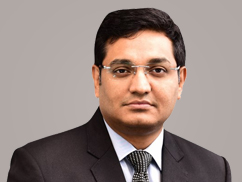 In 1998, Mr. Sameer Yogishwar started his professional career with India’s largest mortgage finance company, HDFC (Housing Development Finance Corporation) Limited, one of the Founder Shareholders of HDFC Life, as a Management Trainee. In his 16-year stint with HDFC Life, Mr. Yogishwar was involved across multiple functions including process, operations, learning & development, agency sales, bancassurance, strategic alliances and international business. Within HDFC Life, he has essayed multiple senior leadership roles, having headed the zonal business functions in large geographies of the country, apart from spending a significant part of his career in building up and managing the organization’s 500 strong branch operations network in India.

Mr. Yogishwar has traversed critical junctures in the last 19 years to become the first CEO of HDFC International Life & Re in January 2016. He was instrumental in obtaining the license and incorporating the Company in the DIFC.

Mr. Yogishwar also serves on the Board of Directors of the DIFC Insurance Association NPIO.

Mr. Yogishwar holds a Bachelor degree in Economics and a Masters in Management Studies (Finance), both from Mumbai University. As Head of Business Development and Strategy, Rahul has overall strategic and operational responsibility for the entire portfolio of the company’s solution offerings. He drives and oversees the business development efforts and client relationship management initiatives of the company.

Rahul started his professional journey with HDFC Life as a Management Trainee in 2004. In his more than a decade long association with HDFC Life, he has contributed significantly across multiple functions viz. business & client management, sales leadership and international business recently.

Rahul holds a Master in Business Administration and has a Bachelor degree in Engineering. As an Appointed Actuary of HDFC International Life and Re, Eshwari serves in the capacity as an Advisor to the company and is also a Responsible Officer with complete responsibility and accountability towards the actuarial function of the company.

Eshwari brings in a wealth of experience in life insurance & reinsurance and has a career spanning more than 25 years. She began her professional journey with Life Insurance Corporation of India in 1990 and has worked across various functions viz. actuary, underwriting, claims, information technology etc. before moving to HDFC Life in 2006. Fouzy began her career in 1993 as a practicing lawyer before moving to Union Bank of India, a leading public sector bank in India. In her previous roles, she has worked as Vice President-Legal & Compliance at Reliance Capital Asset Management (UK) plc (Reliance Wealth Management), (Erstwhile DIFC Branch). She was also associated with Menafactors Limited, a FIMBank Group Company in the DIFC as Head of Compliance & Legal. She also held authorized Compliance Officer and Money laundering Reporting Officer positions forthe above mentioned companies in DIFC. 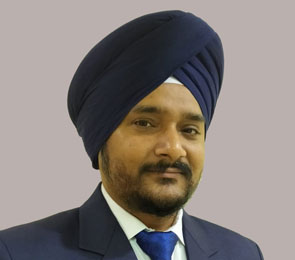 As Head of Finance, his responsibilities include corporate finance, business planning, budgetary controls and investment management. He also oversees and manages the general office administration for the company.

Prior to joining HDFC Life in 2009, Harpreet, had worked with various organizations viz. M.S. Kalra & Associates, Reliance Communications and Reliance Fresh Limited in Finance and Accounts functions. In HDFC Life, he had started his career as Head Regional Finance and Accounts in North India. He was heading Indirect Taxation function at the corporate office in Mumbai before moving in to his current role as Head of Finance, HDFC International Life and Re. 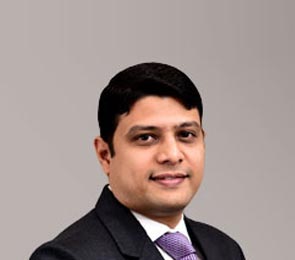 Abhishek has a PGP in Management and holds a Master degree in Commerce with specialization in Finance. 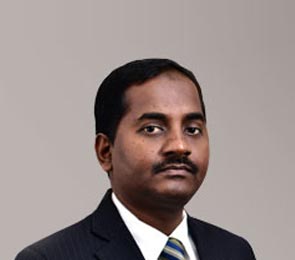 As Head of Underwriting, Dr. Badsha has overall responsibility of risk selection of the lives reinsured with the company. He has the mandate to assign underwriting limits and evaluate/decide on facultative underwriting placements. He is also entrusted with designing tailor made risk solutions for ceding partners and liaising with retrocession partners for alternate risk transfer.

Prior to joining HDFC Life in 2006 Dr. Badsha, was working independently as a para-medical practitioner in India and was also associated with Perot Systems for a brief stint. In HDFC Life, he has been instrumental in setting up the underwriting function at the operations hub in India. He has handled numerous complex underwriting decisions and high value policies which were of significant importance to the company.

Dr. Badsha holds a Bachelor degree in Physiotherapy and a Post Graduate Diploma in Insurance Management. He is also Certified as an “Associate of Reinsurance Administration” from LOMA, USA. 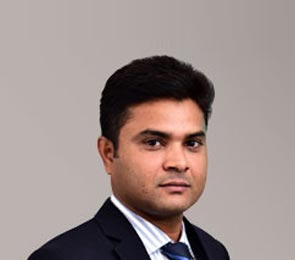 As Head of Operations and Claims Management, Joby has overall responsibility of managing reinsurance operations of the company. He oversees partner management, treaty management, technical accounting and claims management.

Joby began his career in 2002 with IDBI Bank as a Financial Advisor. Prior to joining HDFC International Life and Re he was associated with leading companies in India and GCC viz. Hinduja Global Solutions, United Health Group, Swiss Re, Al Jazira Takaful and Chartis Insurance in managing (re)insurance operations.